Pakistan Kickboxing Federation headed by Mr. Muhammad Ashfaq, the federation’s secretary general, will be participating at the 2019 World Open Martial Arts Championship. We welcome their participation, and their support for our championship is greatly appreciated! 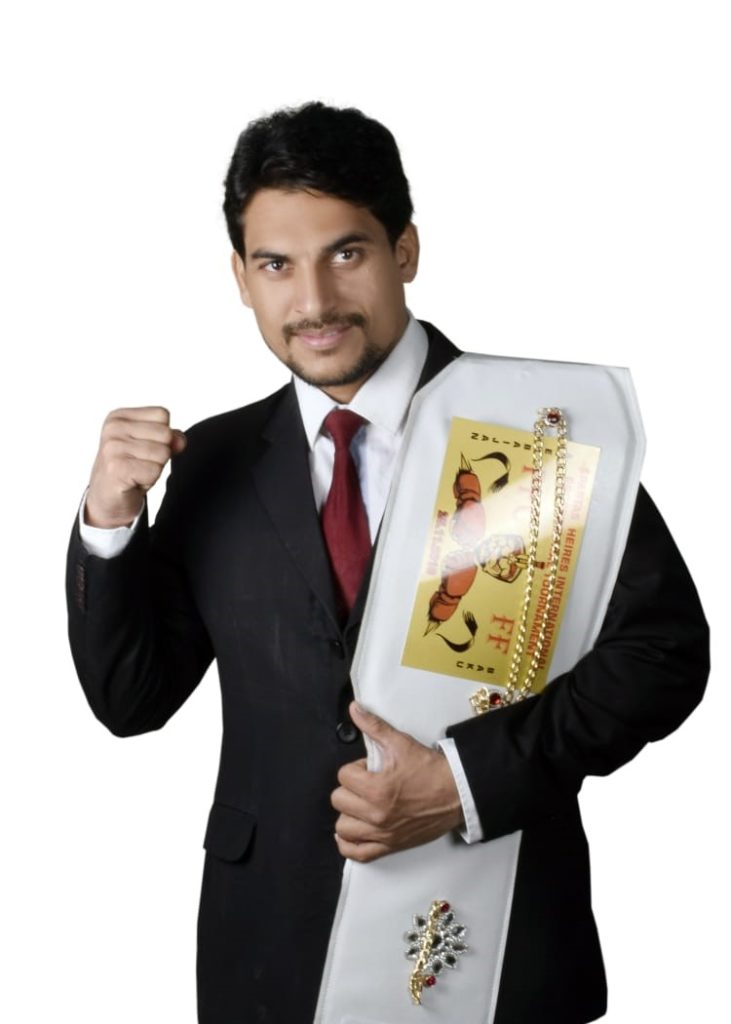 The WFMAF proudly congratulate the Ukrainian Federation of Mixed Martial Arts (UFMMA) for organizing the Mixed Martial Arts Championship on May 11 – 12, 2019, and for their dedication in the promotion of MMA in their country.  We would also like to congratulate the athletes for their achievements in winning medals. The age groups of the championship are categorized as 13 years & under and 14 years & up. For more information about the UFMMA, visit their Facebook page here: https://www.facebook.com/ufmma.com.ua/. Here are the video highlights of the championship. 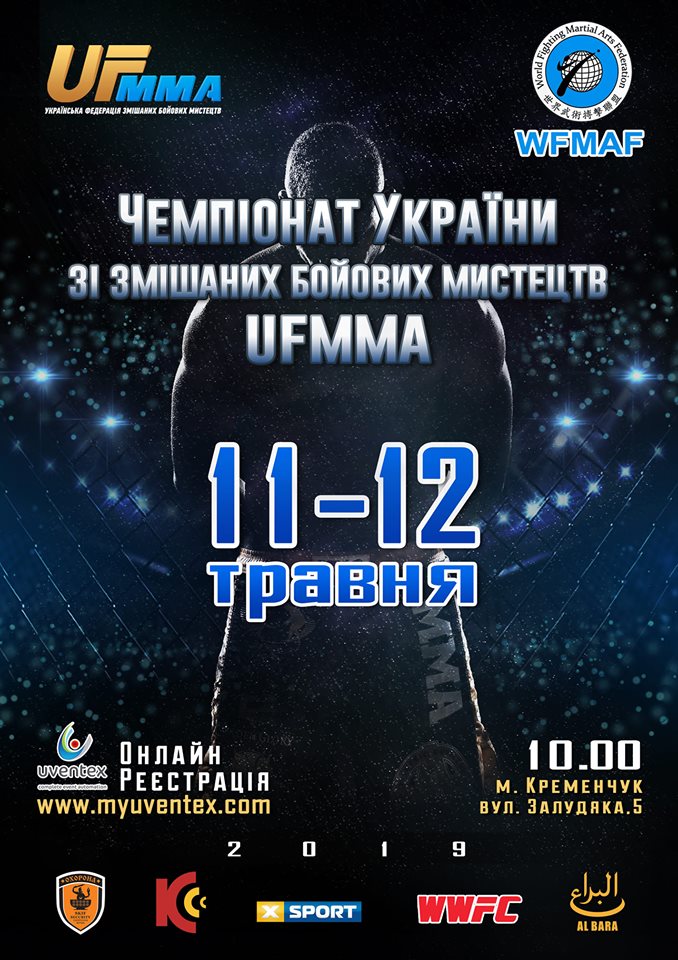 The World Fighting Martial Arts Federation (WFMAF) is pleased to announce the Ukrainian Federation of Mixed Martial Arts (UFMMA) has joined with the WFMAF as a National Federation member, and will now be hosting national and international tournaments in their region.

The WFMAF has given the Stamp of Approval to the UFMMA to hold the WFMAF European Open Cup for Mixed Martial Arts. This tournament will strengthen sports friendships among the participants of the competition, their coaches, schools, family, friends, sports clubs, organizations and countries around the world. This is an amateur event and is not open to any professional athletes. 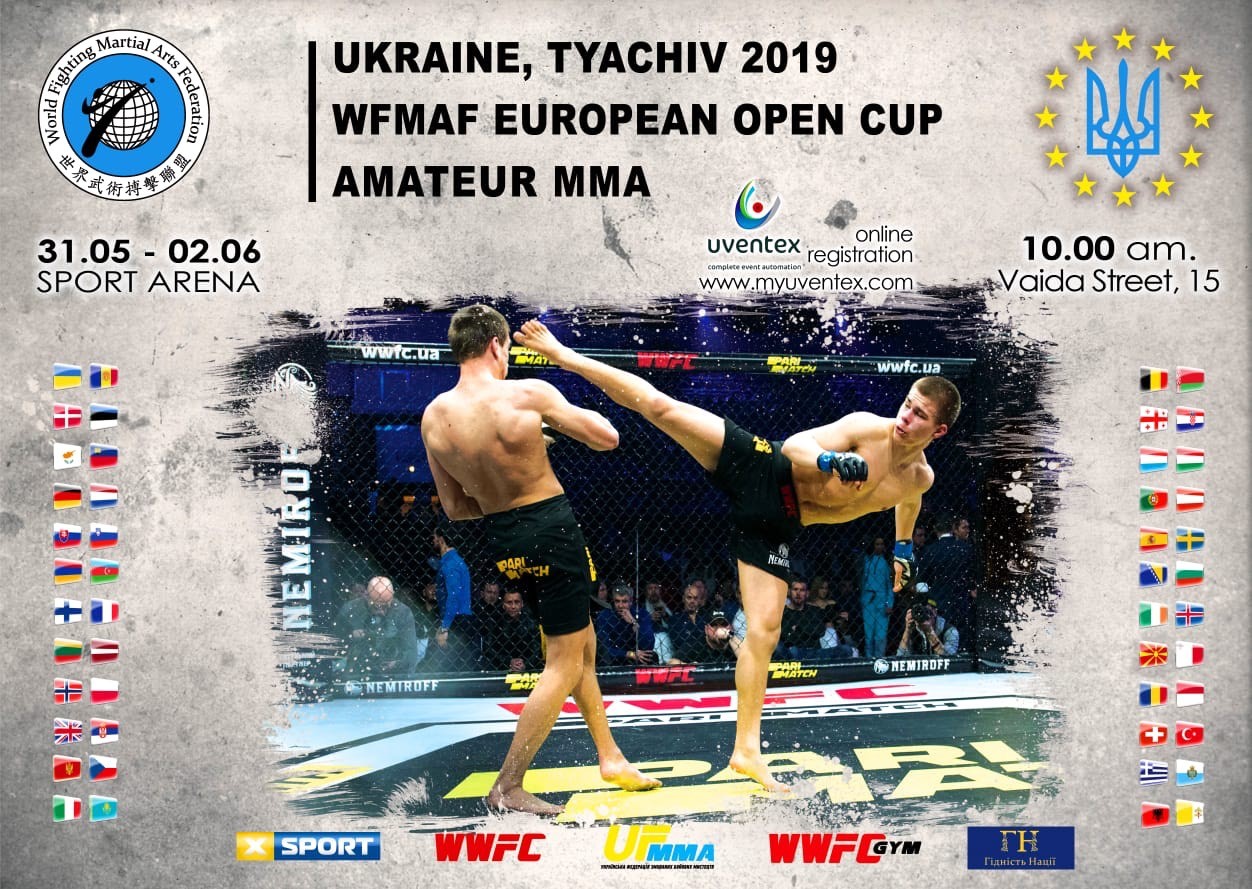 The WFMAF European Open cup for MMA (Mixed Martial Arts) for Children, Adolescents, Cadets, Juniors and Adults, according to the UFMMA will take place from May 31, 2019 thru June 02, 2019. The venue address is: Ukraine, Tiachiv City, Vaidy Street, House # 15. Invitation package document with detailed information about the tournament is posted below.

Please join us in supporting the UFMMA and share the word about the WFMAF European Open Cup for Mixed Martial Arts. To register follow this link: https://myuventex.com/.

To stay updated with news about the world of international martial arts follow us on Facebook at: https://www.facebook.com/wfmaf/. 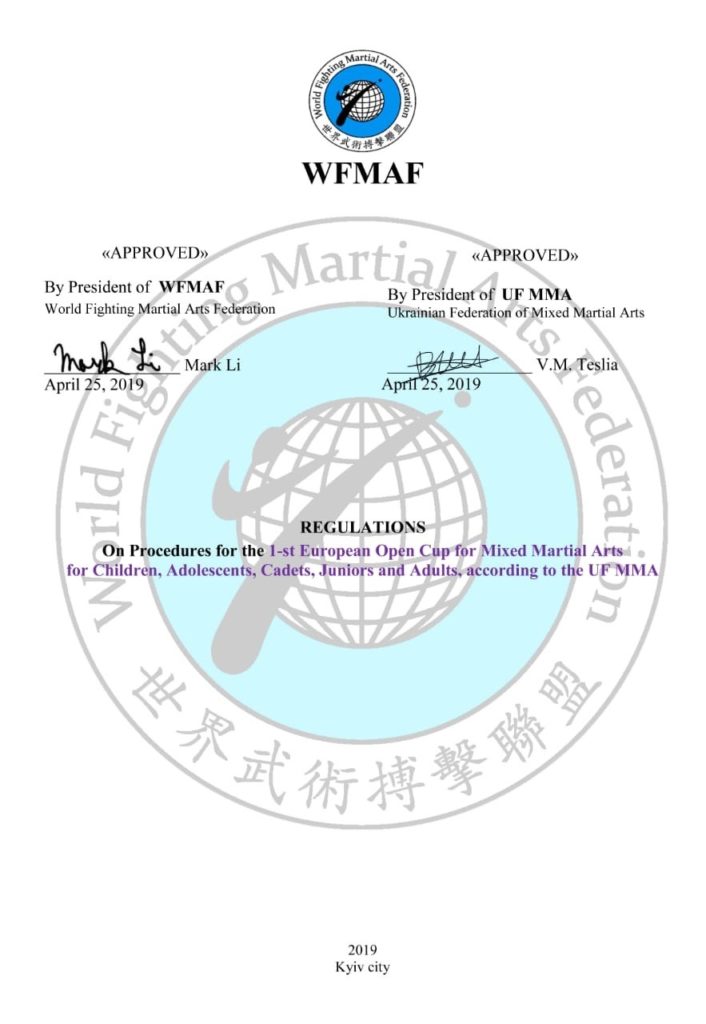 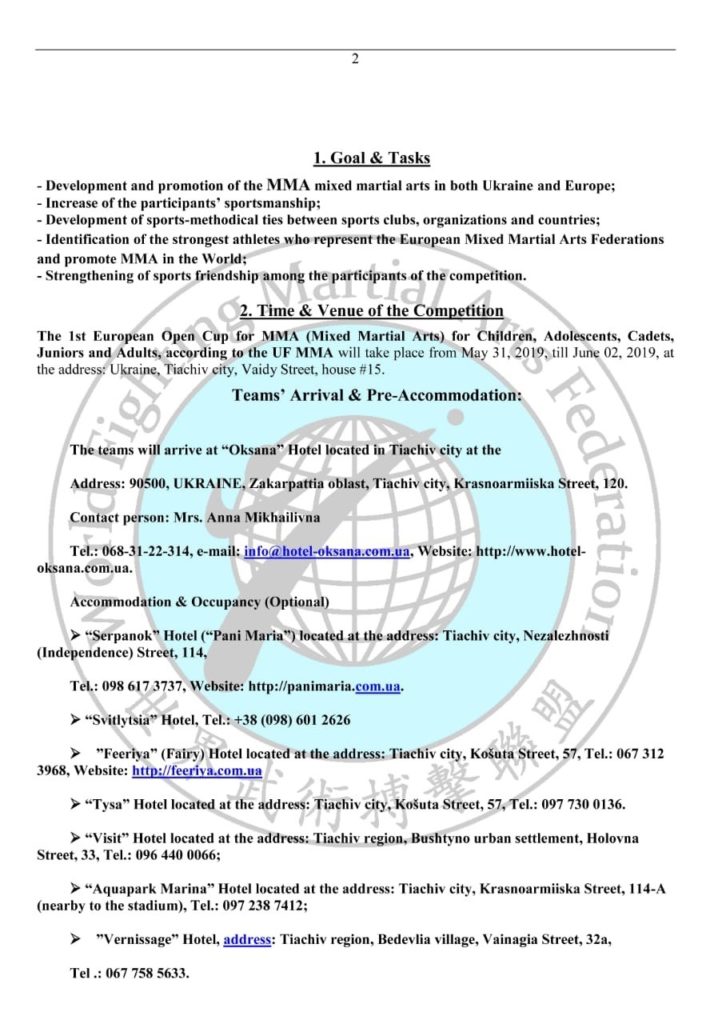 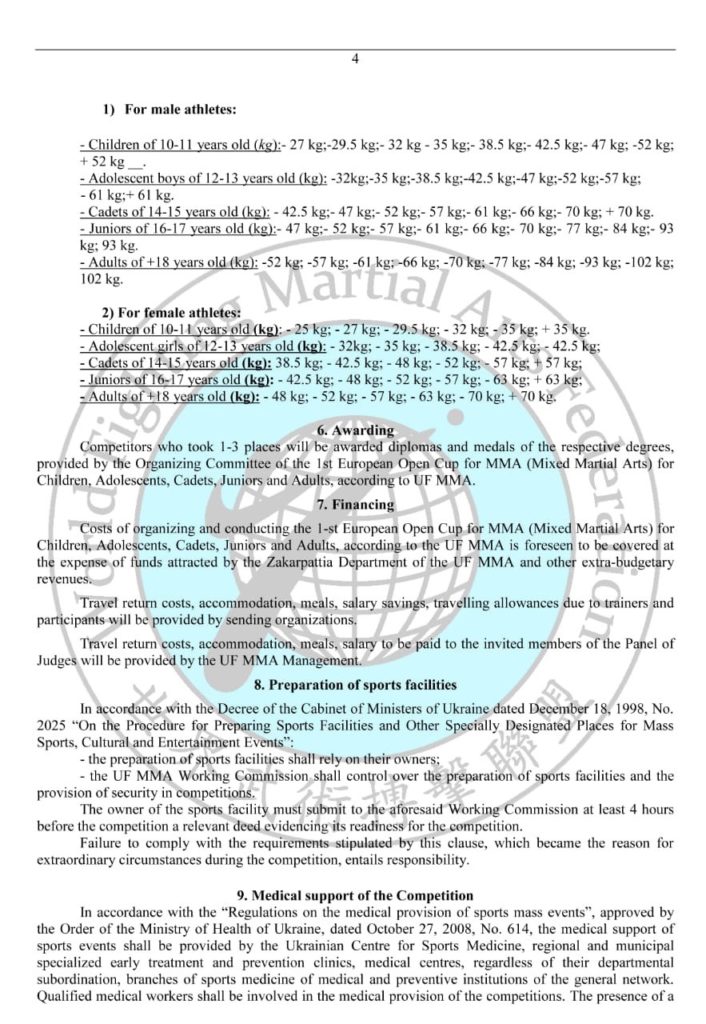 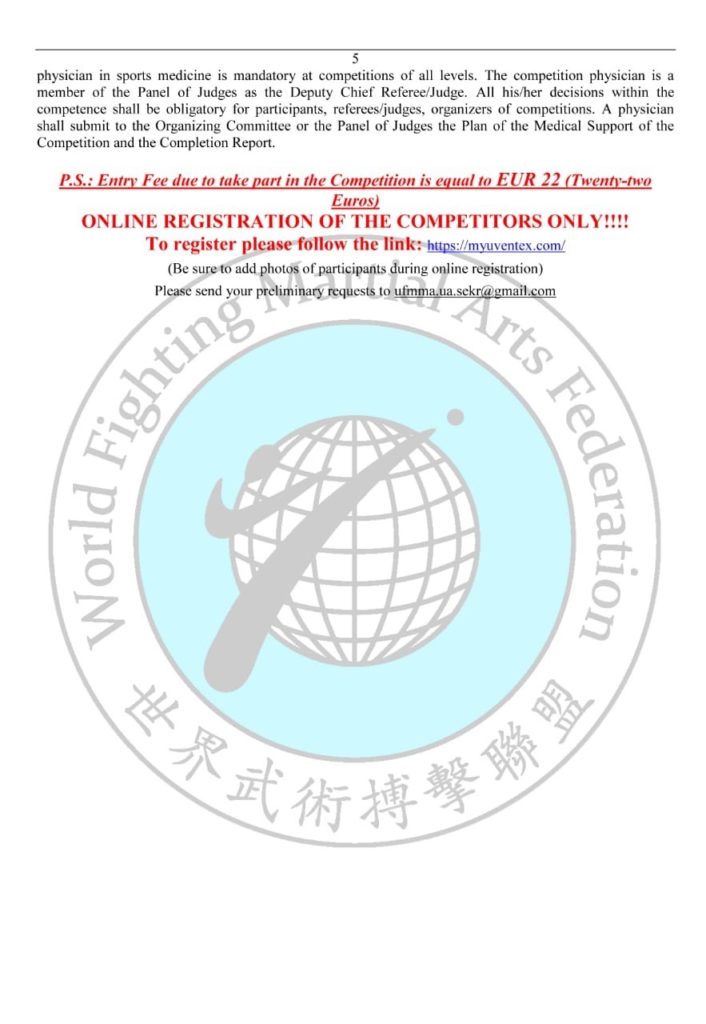 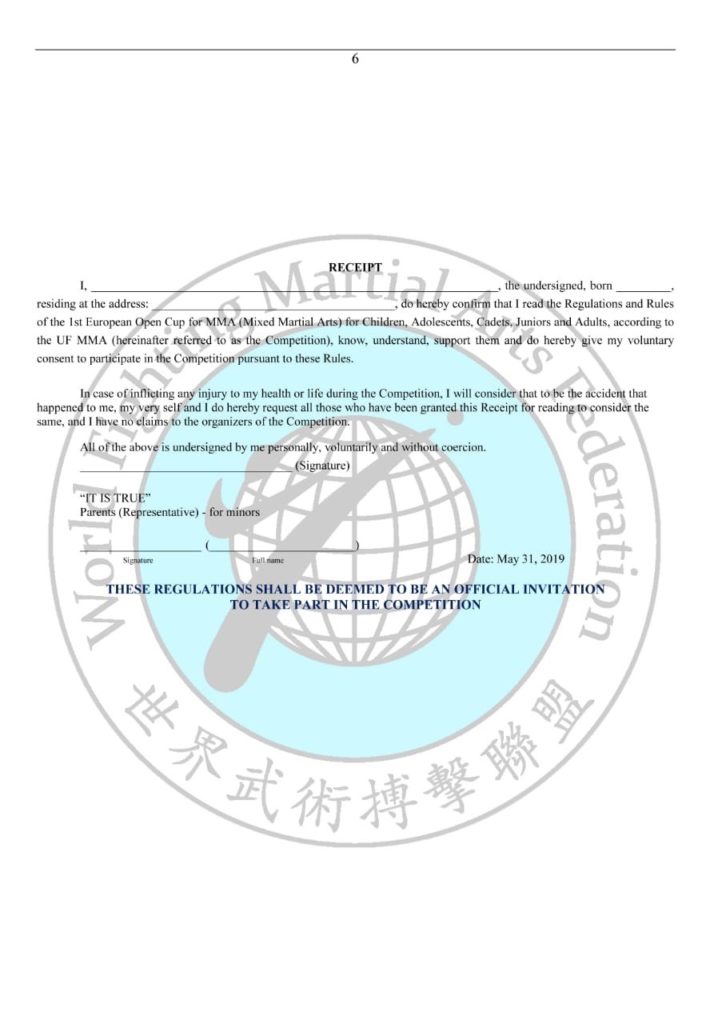 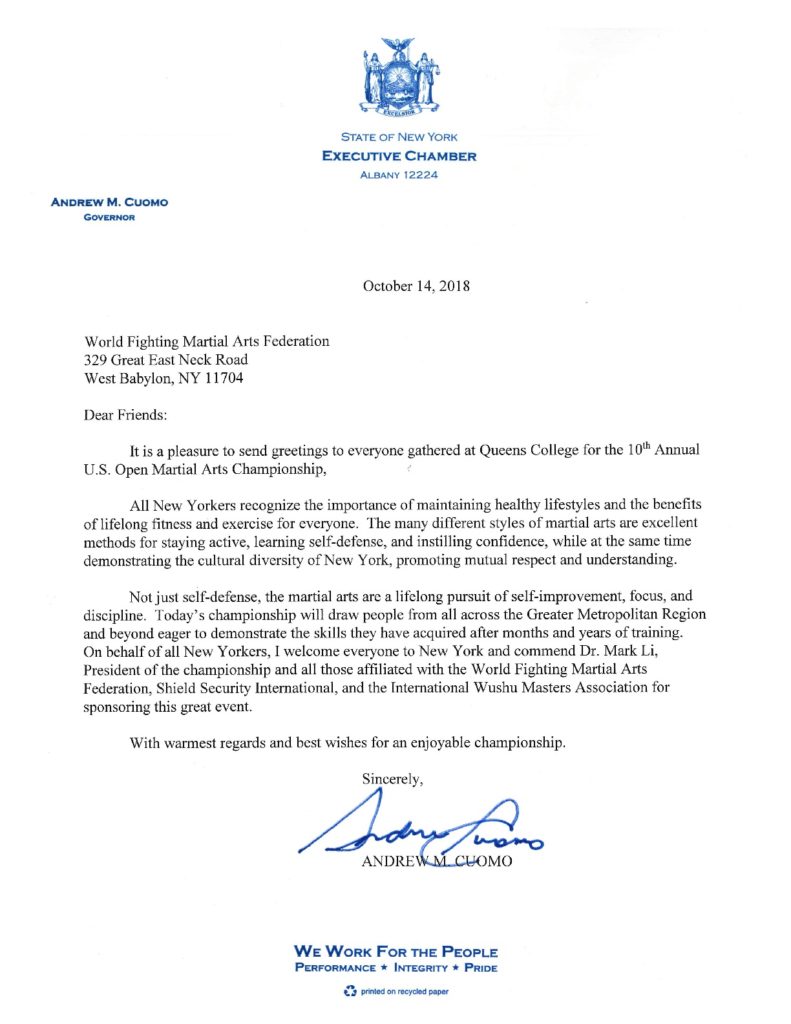 It is a pleasure to send greetings to everyone gathered at Queens College for the 10th Annual U.S. Open Martial Arts Championship.

All New Yorkers recognize the importance of maintaining healthy lifestyles and the benefits of lifelong fitness and exercise for everyone. The many different styles of martial arts are excellent methods for staying active, learning self-defense, and installing confidence, while at the same time demonstrating the cultural diversity of New York, promoting mutual respect and understanding.

Not just self-defense, the martial arts are a lifelong pursuit of self-improvement, focus, and discipline. Today’s championship will draw people from all the Greater Metropolitan Region and beyond eager to demonstrate the skills they have acquired after months and years of training. On behalf of the championship and all those affiliated with the World Fighting Martial Arts Federation, Shield Security International, and the International Wushu Masters Association for sponsoring this great event.

With warmest regards and best wishes for an enjoyable championship.

We proudly announce New York Life as one of the sponsors of the 2018 U.S. Open Martial Arts Championship. 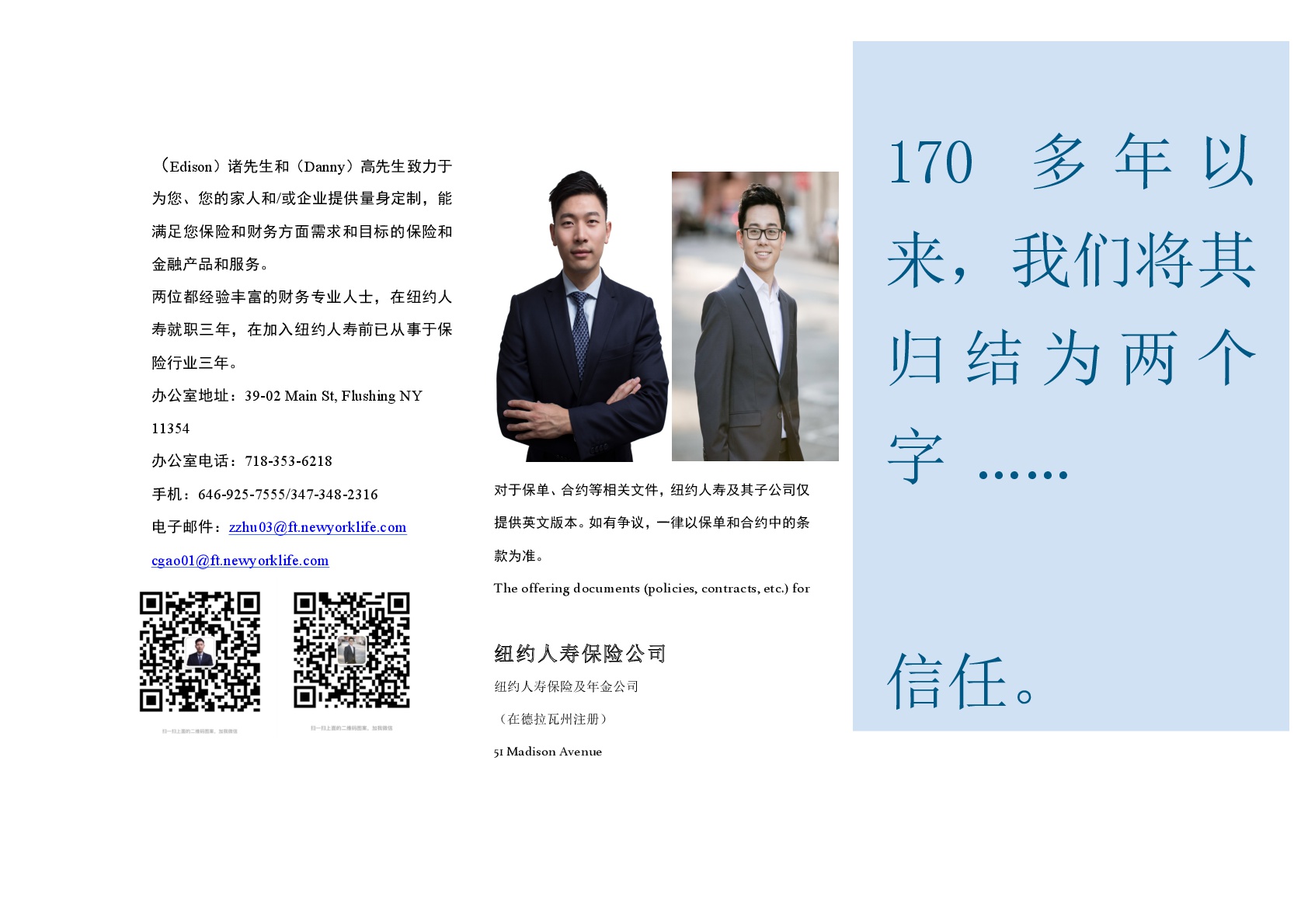 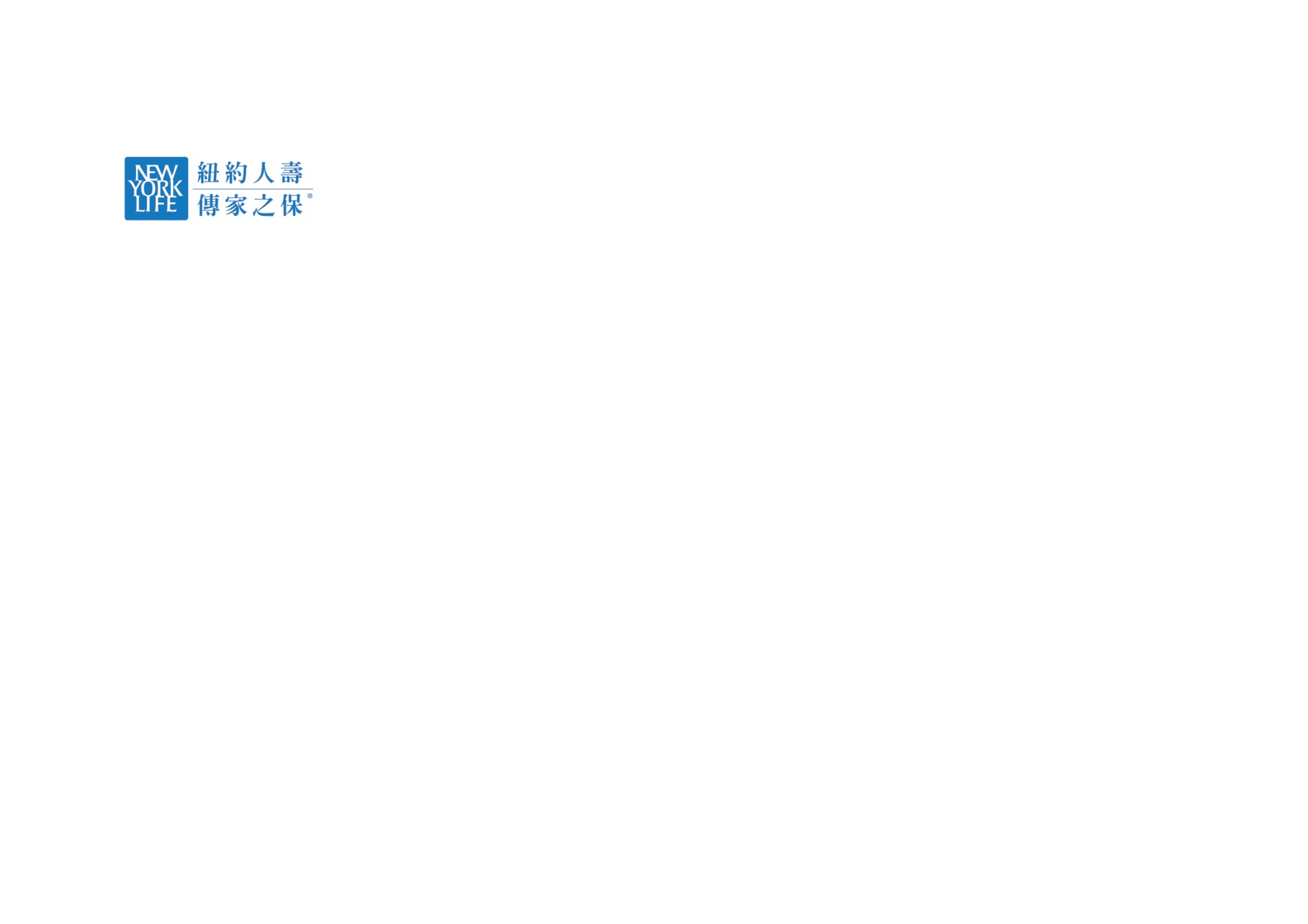 We proudly announce Kai Gao Esquire P.C. as one of the sponsors of the 2018 U.S. Open Martial Arts Championship. 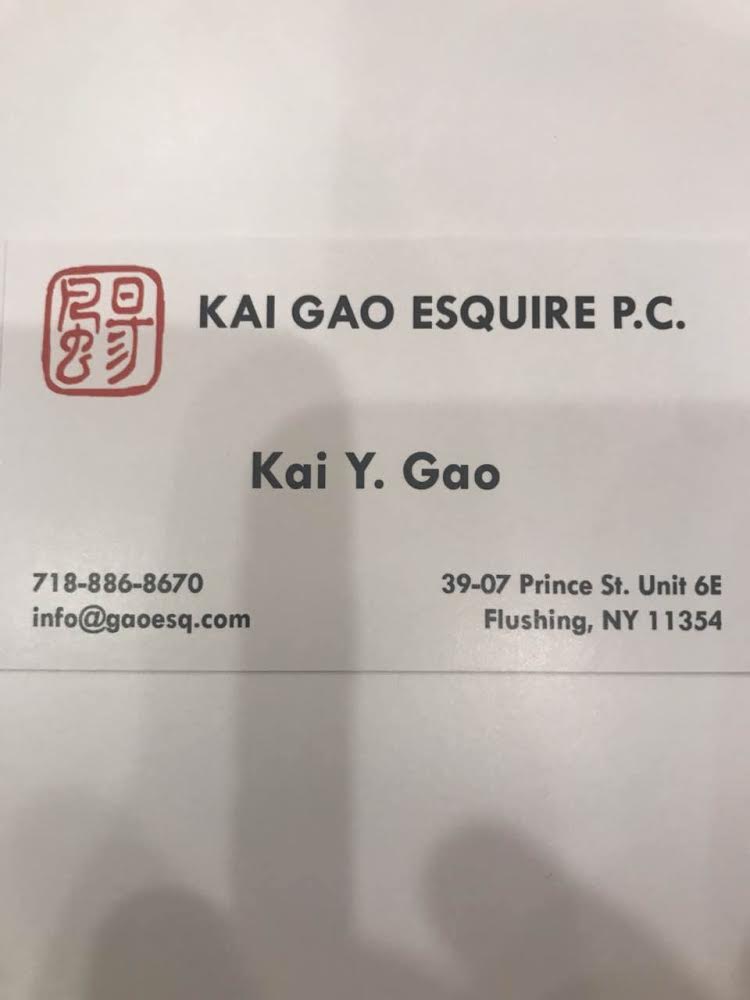 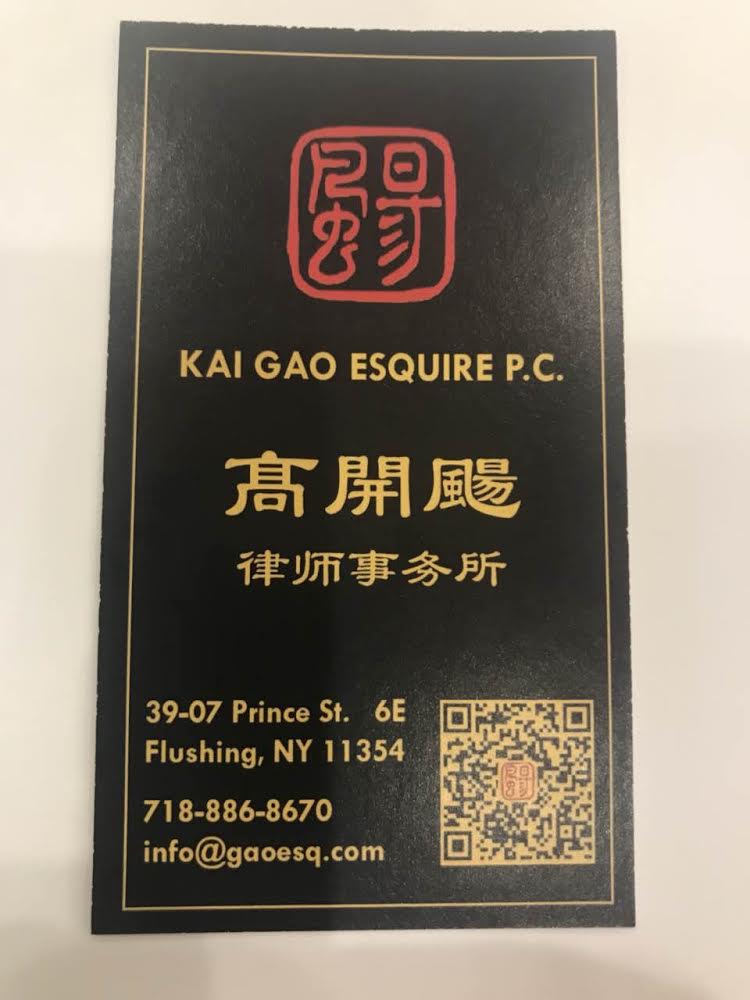 In previous years, the USOMAC has been recognized for community minded activities and demonstrations of martial spirit. NY Senator John J. Flanagan commended the USOMAC for “exemplary service to the community and State in providing an opportunity for martial arts organization to come together in their noble aims and accomplishments, in their unique professional achievements, in their good citizenship, and illustrate these qualities for the edification and emulation of others.” Brooklyn Borough President Eric Adams, New York City Mayor Bill de Blasio, and New York State Assemblyman Felix Ortiz presented citations to the USOMAC commending their civic mindedness and dedication to engendering the true spirit of martial arts.

This year, in keeping with its tradition of giving back to the community, the USOMAC is raising money for mental illness, with a goal of donating a minimum of $1000 to the Psychiatric Rehabilitation Department at Zucker Hillside Hospital to help patients train in coping skills, recovery skills, and job training.

The USOMAC is an occasion for celebrating cultural traditions, for exchanging knowledge, for recognizing the dedication and skills of the athletes who gather, the dedicated teachers who train them, the families who support and encourage them. During the Opening Ceremony, as has been done in previous years, Masters in all disciplines will demonstrate their artistry in their particular style so that all who gather have an opportunity to appreciate the rich, cultural history in which each style is rooted. The public is invited to attend as spectators, as participants, to be an active part of a cultural exchange, to support this international and community event.

The 2017 USOMAC is happy to be raising money to donate to Zucker Hillside Hospital Psychiatric Rehabilitation Department that provides patients with programs seven days a week in coping skills, recovery skills, and job training.

Zucker Hillside Hospital is Northwell Health’s nationally recognized behavioral health center known for its pioneering clinical, teaching and research programs. Inpatient services include adolescent, adult and geriatric units. Treatment specialties include early phase treatment, depression, schizophrenia, bipolar and personality disorders, as well as a discreet women’s unit. Outpatient programs serve all ages and encompass the full continuum of care. These services include health centers, partial hospital treatment programs, and a full range of psychiatric rehabilitation services. Programs for alcohol and chemical dependency are available both on the main campus and in numerous community-based sites. The goal at Zucker Hillside Hospital is to promote wellness and to reintegrate patients back into the community to work, attend school, socialize, and live independently.

Please support our goal of raising $1000 to present to Zucker Rehabilitation Department at the Opening Ceremony of the 2017 USOMAC.  Donations can be made with the donation form below.  Thank you for your generous contributions.

The judge training meeting is organized by the World Fighting Martial Arts Federation (WFMAF) to promote a unified standard and professionalism of judging at the U.S. Open Martial Arts Championship, to enhance the scoring accuracy, and to improve the overall organization of the competition. At the meeting, judges will go over the existing and new rules and regulations for both the form/kata divisions and the hero of combat divisions and to discuss the organizational issues of the competition.

The World Fighting Martial Arts Federation (WFMAF) is an international nonprofit organization whose mission is to preserve the original martial root of martial arts through communication, exchange, and research; to promote through public events the diverse cultures inherent in martial arts; to make a positive impact on our society through teaching the core values of martial arts and educating people about their character building qualities.